In 1983 the first Desert Eagle semi-auto pistol chambered in .357 magnum was introduced to the firearms buyers of the world. Since 1983 the Desert Eagle was produced in additional calibers, .44 magnum, 41 magnum, 50 Action Express and the necked down version of the 50AE….the speed demon .440 Corbon. In 2017 the Desert Eagle is made in various models chambered in .357 magnum, .44 Magnum and the kick-butt .50 Action Express or .50AE. The Baby Eagles are not miniature Desert Eagles and are completely different internally. And no Israel SF, Military, secret service or any pistol packing government agency were issued the Desert Eagle in any caliber. Now there might be an Israel rouge version of our Dirty Harry but to this date I have not heard of him or her.

The legendary Desert Eagle is a single action self-loading gas operated rotating bolt semi-auto pistol. The rotating bolt, similar to semi-auto rifles such as the M1A, make this pistol capable to handle powerful pistol cartridges. The Desert Eagle Black L5 tipping the scales in at 2 pounds 14.6 ounces is about 25 percent lighter than the 4 pound 6.6 ounce Desert Eagle L6 in stainless steel . This is a good thing when packing this hand cannon in the wilds where furry things want to eat you. 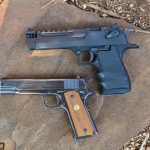 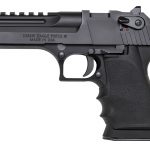 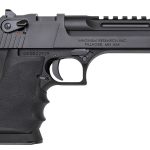 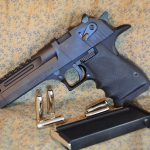 As for having this DE Black L5 for other than grins and giggles to shock your friends, I would say there is a market for using this beast for hunting and backpacking in lion and bear country. I say this because many of the hand-cannon revolvers shooting the big-bore calibers weigh as much or more than the DE Black L5 which is just under three pounds. The Ruger Redhawk in .44 Remington Magnum weights a little over three pounds and the Blackhawk single action in .44 Rem Mag with a 5.5 inch barrel is three pounds. The newest S&W Model 629 with 6.5 inch barrel weighs a shade over three pounds.

Each of these revolvers chamber six rounds. The Desert Eagle Black L5 has an eight round magazine plus one in the chamber makes nine. Now fully loaded the DE Black L5 have three more .44 Rem. Magnums which brings up the weight a couple of ounces. As in all semi-auto pistols, it is much faster to drop the mag and insert eight fresh bad-boys over the one or two at a time for revolvers. The DE Black L5 has a generous mag well enhancing the hurried reloading. Even using speed-loaders for the double action S&W .44 revolver is more difficult to use when 800 pounds of teeth and claws is thundering your way. So the DE Black L5 size can fool you but it is lighter than most six inch barrel .44 Rem. Mag. revolvers and having less recoil. Less recoil due to the gas operation rolling bolt and the Integral Muzzle Brake. Eight quick shots and eight quick follow-up shots.

To cap this off. If you are like me, dreaming about the next adventure into lion and bear country and the big-bore handgun I will take, don’t rule out the World’s largest caliber semi-auto handgun the Desert Eagle Black L5. This is truly a great firearm. 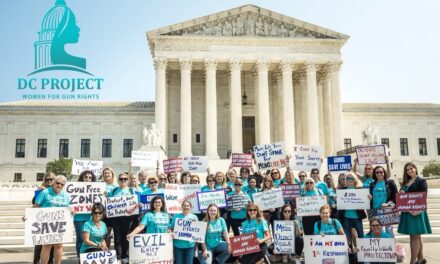 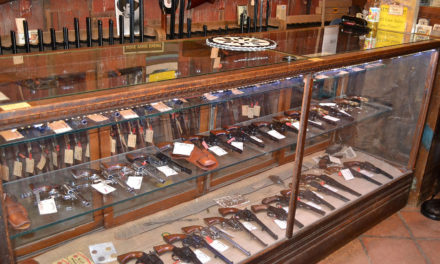 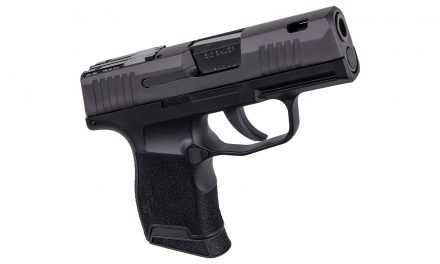