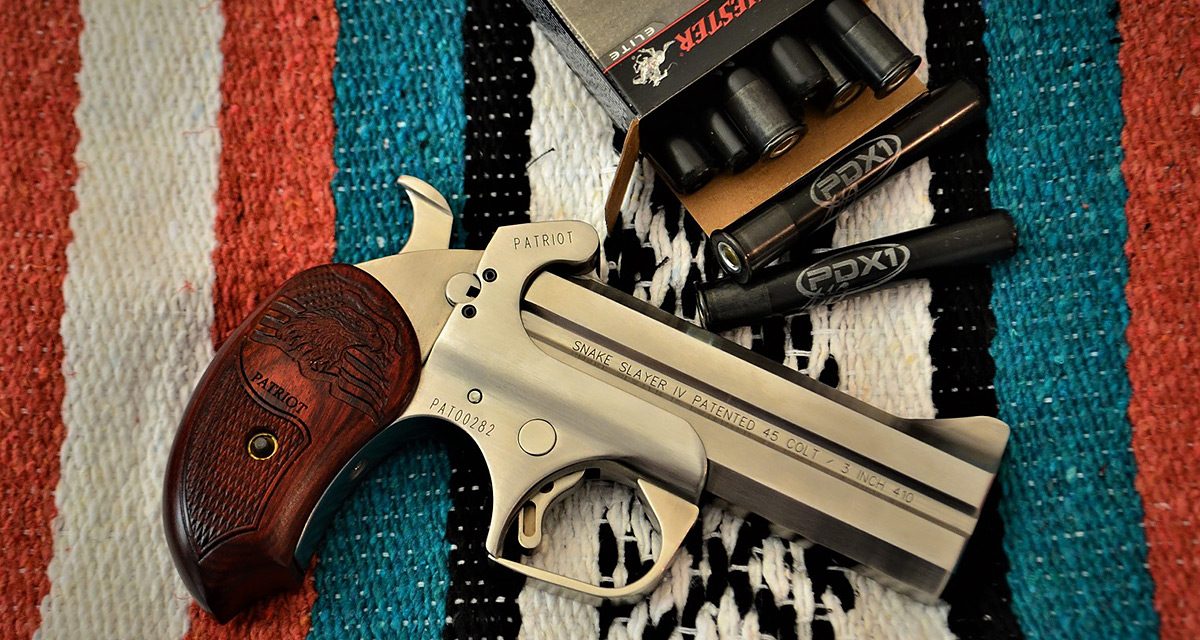 Last minute requests from the boss caused Tammy to run late getting off work. She was the last employee to leave. The cleaning crew were about finished vacuuming and emptying the trash. She looked at her watch and was astonished at how the time had flown. It was 8:14 pm. She thought to herself, “This is way too late for me to be leaving the office and going to that damn dark parking garage.” Tammy never liked parking her car at this garage even in broad day light. She left the office and a few steps down the hall and entered the elevator. The elevator would take her to the 4th floor of the garage. In the elevator she started experiencing butterflies in her stomach. She kind of chuckled to herself, “No need to be worried about the late hour. There are security officers in the building and in the garage. I should have called one for an escort.”

Tammy exited the elevator onto the 4th floor of the garage. She stood there for a few seconds looking over the vast expanse lying before her. She thought, “Well no one in sight…including the security officer who is assigned to the garage.” Tammy took a deep breath and stepped forward and walked lively toward her Toyota SUV. As she walked, she nervously kept looking around to see if anyone was there. If the boogieman was there. She saw no one or thing.

As Tammy came closer to her SUV, panic was trying to burst out of her consciousness. It was trying to cloud her thinking and take over her actions. She reached into the top of her shoulder bag to retrieve the keys. She felt the remote and unlocked the vehicle. She quickly opened her door and slid into her fortress of steel and glass. She was safe and a little willy-nilly about the boogieman.

Suddenly, there he was. The Boogieman. The Boogieman had jerked opened her passenger door. “This can’t be. I made it to my vehicle. This is not fair!” Tammy thought. She looked right at this burly man and told him to leave her alone. He did not. This dirt-bag reached to grab her. He yelled, “Come here BITCH!”

He found himself a pretty little thing. He had been watching her for several days. What a prize. He will have fun with this one. He has had many. As he reached to grab her, he saw something strange. Her hand came flying out of her purse and for a second he saw stars and felt a warmness running down his face. From experience he knew this to be blood. In reaction to this, he jerked back his hand and took a hard look at his pray. “Funny. I never saw this before.” he thought.

The Boogieman…dirt-bag, was looking down the barrels of a pistol being held by his beautiful prize. He thought, “A mere insignificant sheep. This can’t be real. No way she will shoot me.” In a micro second, the last thing the Boogieman saw was a large bright flash. The last thing he heard was two roaring explosions. The last thing he felt was him slipping into darkness heading to a personal meeting with the Fallen Angel he never believed in. 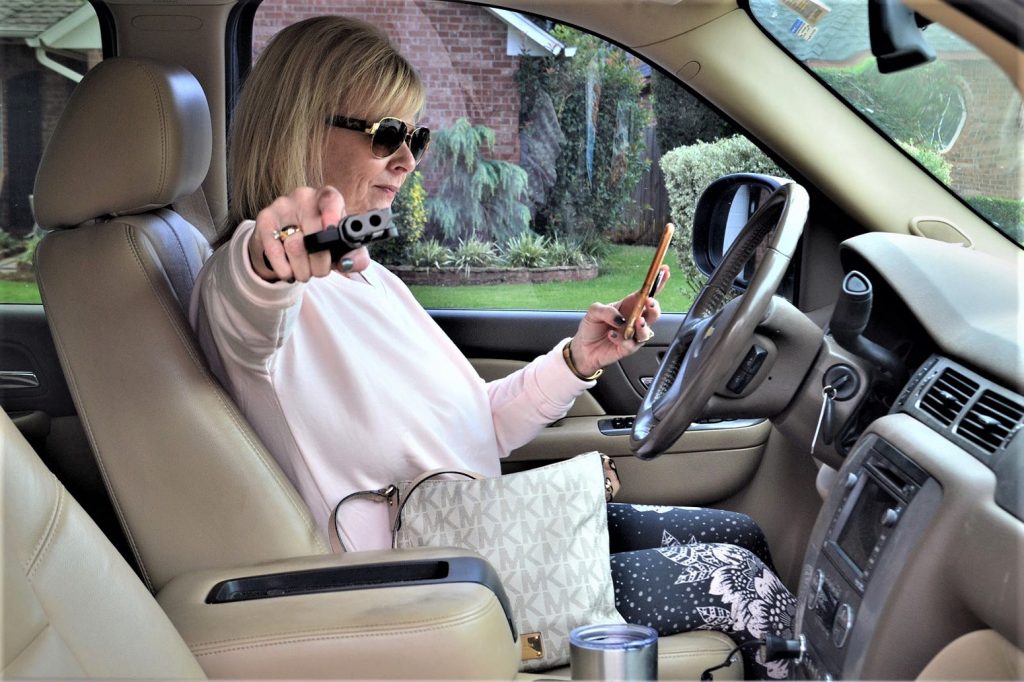 Tammy was a lucky but smart woman. She had no illusions of being a strong woman who can take care of herself. O-she was a strong woman with strong convictions. She believed in herself and believed only she can protect herself. Too few police to protect her so it was up to her. Being the corporate executive, she researched ways to protect herself. She quickly ruled out martial arts as it took too long and rightly believed an experienced powerful attacker would overcome her quickly. Tammy found the only proven option was a firearm. A firearm powerful enough to stop an attacker of any size. She quickly decided against the thirty caliber pistols and revolvers. She wanted something simple to operated, concealable in her purse having the power to end any attack. She wanted a sawed-off shotgun but chuckled of the thought.

Tammy did her research. She decided to have the option of shooting a shotgun shell or a .45 caliber bullet. After all the .45 long colt won the west. Tammy decided the only practical firearm for her was the Bond Arms pistol in .410 shotshell and .45 long colt. No revolvers or semi auto pistols which could jam at the worst moment. She like the simple operation of the Bond Arms pistol. Even though it had a safety, she practiced with the pistol unloaded. She used snap-caps and pointed in a safe direction.

Tammy practiced drawing from her purse, taking off the safety and firing, all in one fluid movement. She practiced to the point this movement was natural and can be done under extreme pressure. Muscle memory if you will. She went to the gun range two times a month to be with likeminded people and practice live fire shooting. She took a gun safety course and instructions from a qualified instructor. She was confident and had a good feeling of being able to protect herself.

Tammy, a fictional character, had the right idea about self-protection. The choosing of the Bond Arms firearm for her and the environment and circumstances, was the right and correct choice for her. The Bond Arms pistols are a highly engineered products of high quality, made in the USA by American workers. Bond Arms makes their pistols for practical use by those adventurous firearms owners. It is a deadly self-defense firearm. 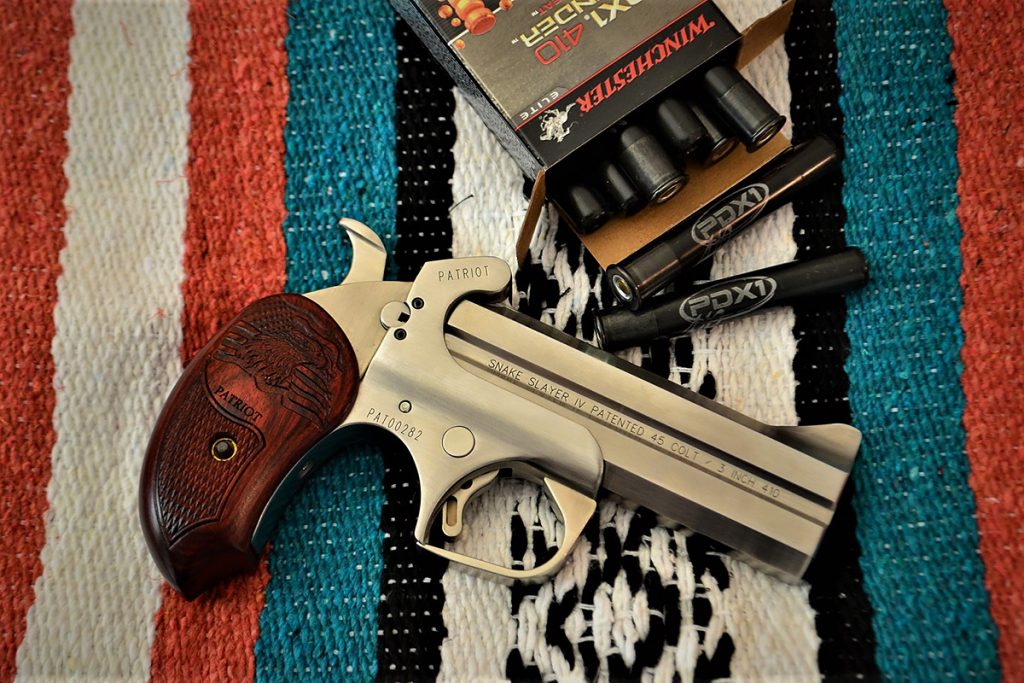 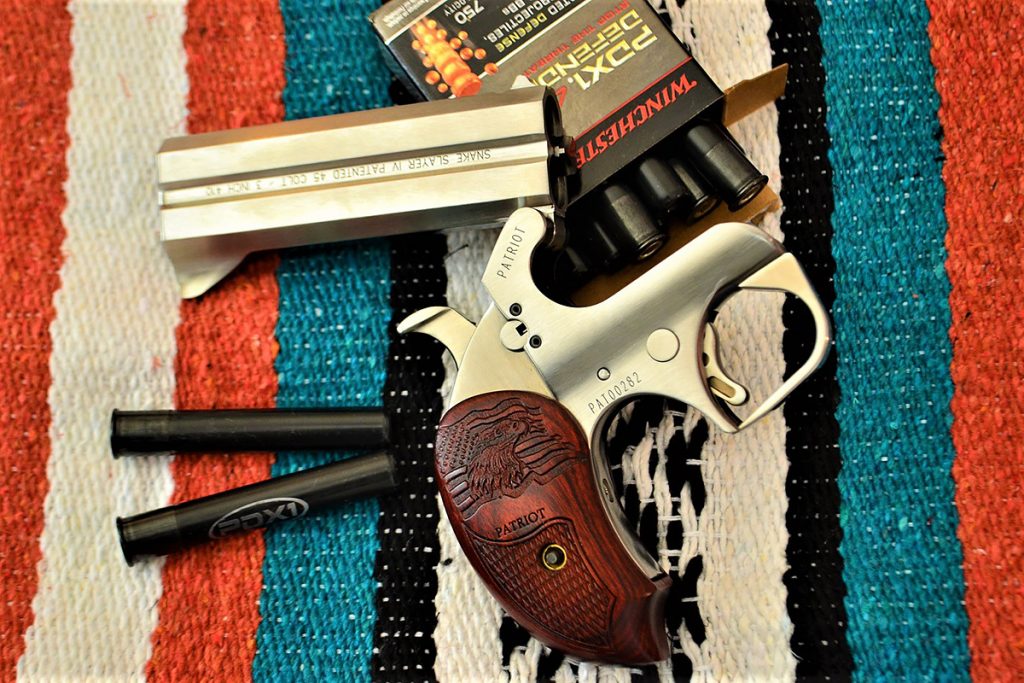 Bond Arms sent me their Snake Slayer IV Barrel. Since I am a proud owner of a Bond Arms Patriot, I could remove my present barrel and add the 4.25-inch Snake Slayer IV barrel. This barrel shoots .45 Long Colt and 410-gauge shotgun shells. This is a very easy task and takes less than a minute. I also received from Leather, Guns and Etc. their Bad Driving Holster which is depicted in this article. An excellent product made in Oklahoma USA. 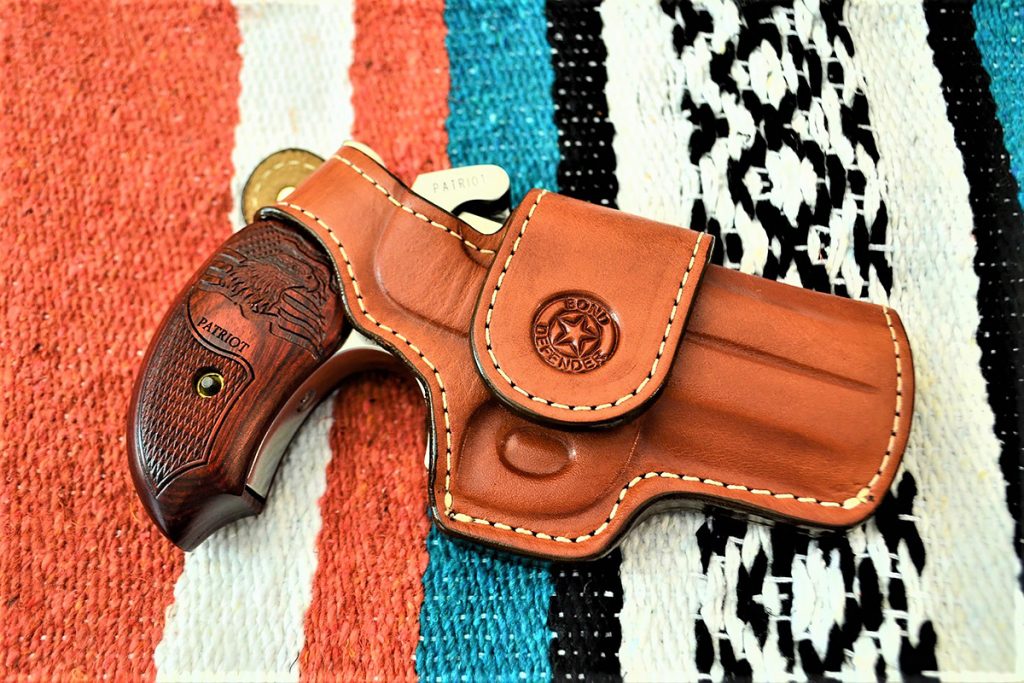 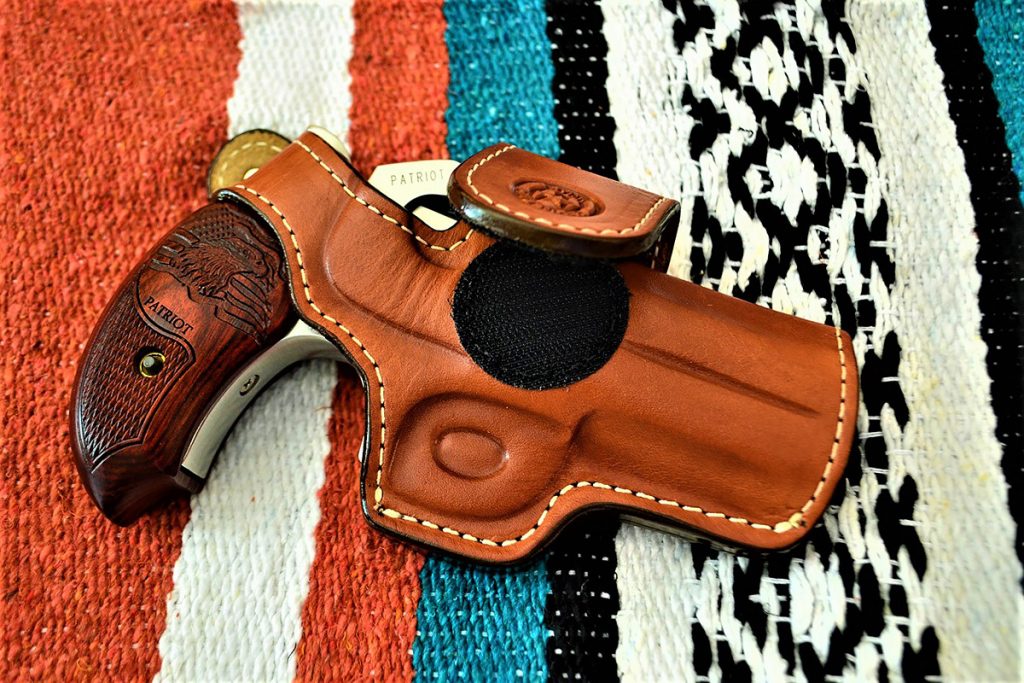 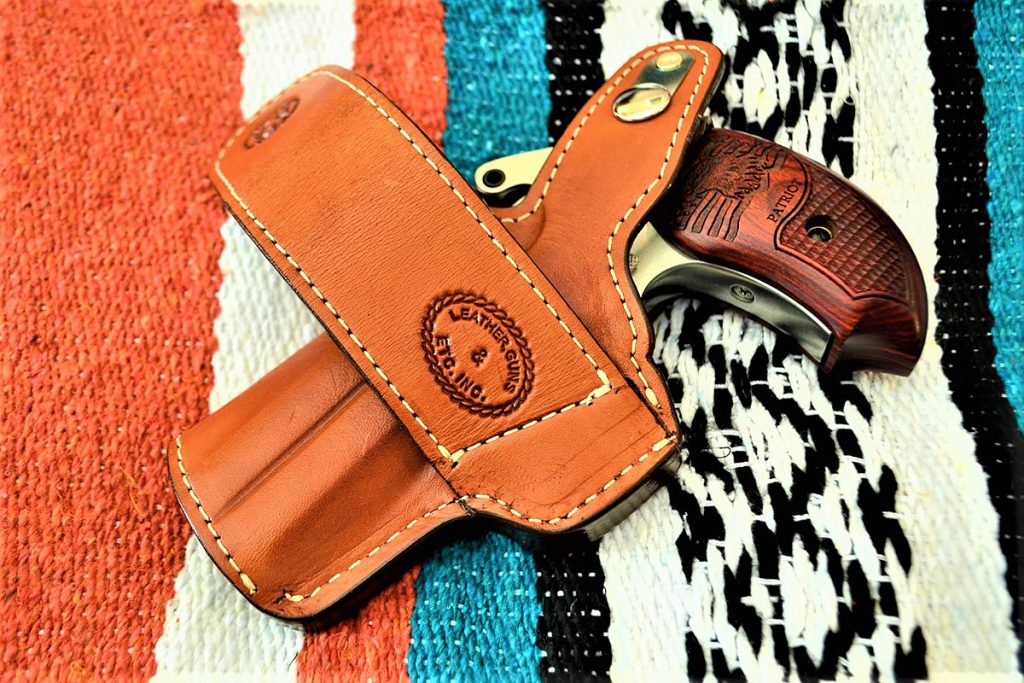 I took my Patriot and Bad Driver Bond Arm holster, which you can buy via Bond Arms, to the Oklahoma City Gun Club for test and evaluation. Winchester sent me Three types of 3 inch 410 shells, number 6 shot, slugs and their “Defense” shells which is loaded with four copper disks and many copper plated BB’s. I also took Champion B27 paper targets to shoot at. Champion targets are just the best I have ever used.

It was an experience in shooting the 4.25-inch barrel with the three-inch shells. There is some recoil in using the full-size 410-gauge shells. The Defense shells had the most recoil. The number six shot had the less. The Winchester three-inch slug shells were controllable. 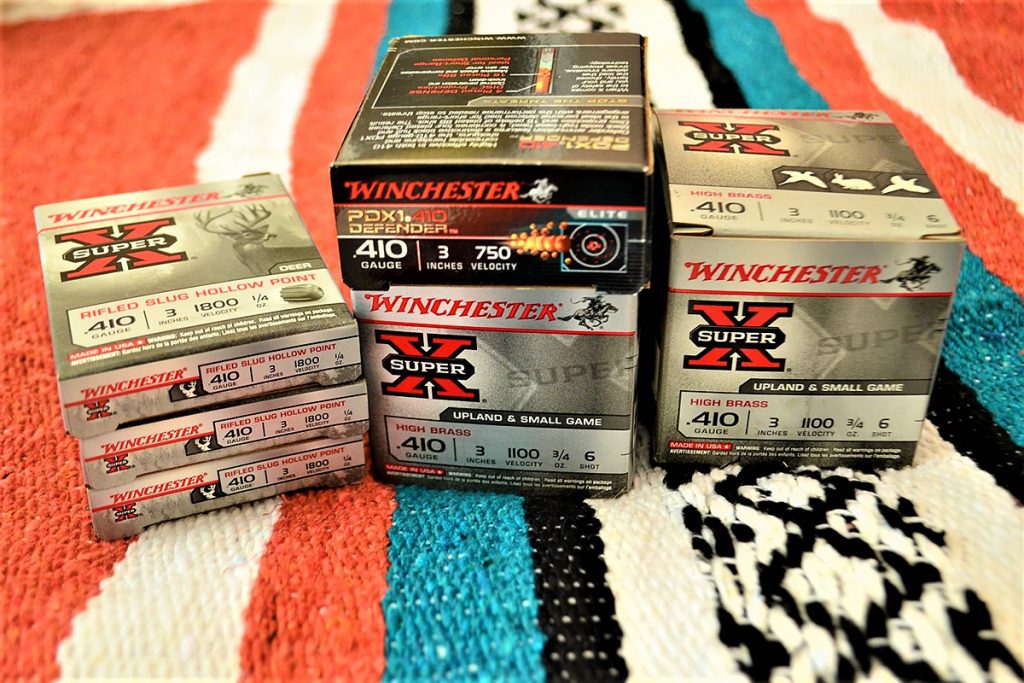 Keep in mind, these shells were made with a smooth bore firearm in mind. The Winchester Defense shells shot well. At the 20 feet distance, the flying disks and copper BB’s grouped well. The BB’s covered about a fifteen-inch area on the target. The disks patterned by striking in a line, one after the other in an upward movement. See photo. At ten-feet or less the receiving party would be likely DOA within seconds. This load has some real recoil with the extended grips on the Patriot. WOWZA! I would recommend “oversized grips” as I believe there would be a market for them.

The three-inch 410 Winchester Slugs at 20 feet hit the target like a freight train. Because of the wadding I could not get a good reading of the feet per second. The grouping on these shells was with in a three-inch area. For this Bond Arms barrel, the slugs grouped three-inches to the right and three-inches low. Still the slugs were in the eight ring being a deadly shot. I like the slugs and the way they shot. Within the average gun fight range of ten-feet or less, this load would be devastating from the Bond Arms pistol.

For those of us who go stomping around the woods. A Bond Arms pistol with this Snake Slayer IV loaded with some Winchester number 6 shot would be ideal for taking small game, pesky rodents and ground birds. Using the number 6 shot shell, I shot at the B27 target from about seven feet. I shot at the center of the silhouette causing an even twelve-inch pattern with some fliers on the edges. I shot at my artistic rendition of a snake causing it to be covered entirely with holes. The number 6 shot is small enough to make it hard to see through this video. Next time in the woods I will be carrying this Bond Arms setup with Winchester number 6 or 4 shot. I strongly believe with some practice you can be proficient in taking small game at close range.

Bond Arms firearms are top quality products. They are engineered to be a safe firearm. All firearms in the wrong untrained hands can be deadly. A person who has trained with a Bond Arms pistol, being safe and utilizing all the safety precautions will have many years of service from this product. Their decedents will have equal service and dependability from the same pistol.

I like Bond Arms pistols. To me they have a taste of the old west when honest men went about their business making a living and protecting their families. These men, and women, would go strapped with protection in the way of a firearm. Many carried smaller pistols and derringers. Bond Arms pistols are not small but not large either. I find them, and this combo of frame and barrel, to be very efficient and serviceable. With the proper holster, the carrying of the Bond Arms pistol with the 4.25-inch barrel would be a good CCW combination. For those of you who are looking for something a little different with power and deadly force, the Bond Arms Snake Slayer IV, or your Bond Arms frame and the Snake Slayer barrel, would be perfect. 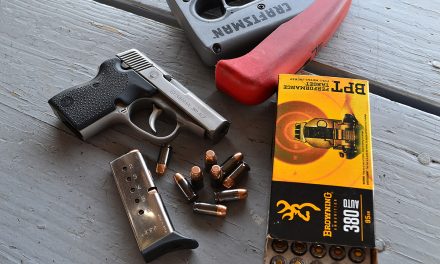 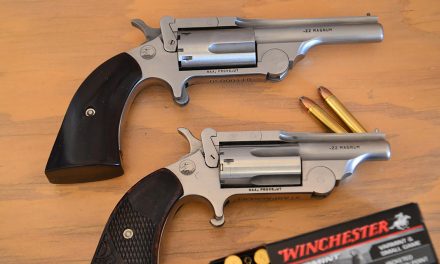 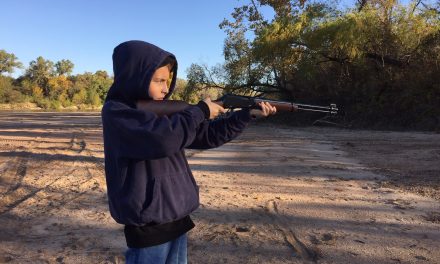 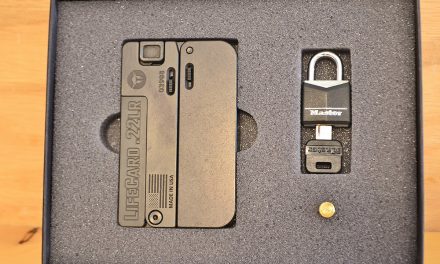